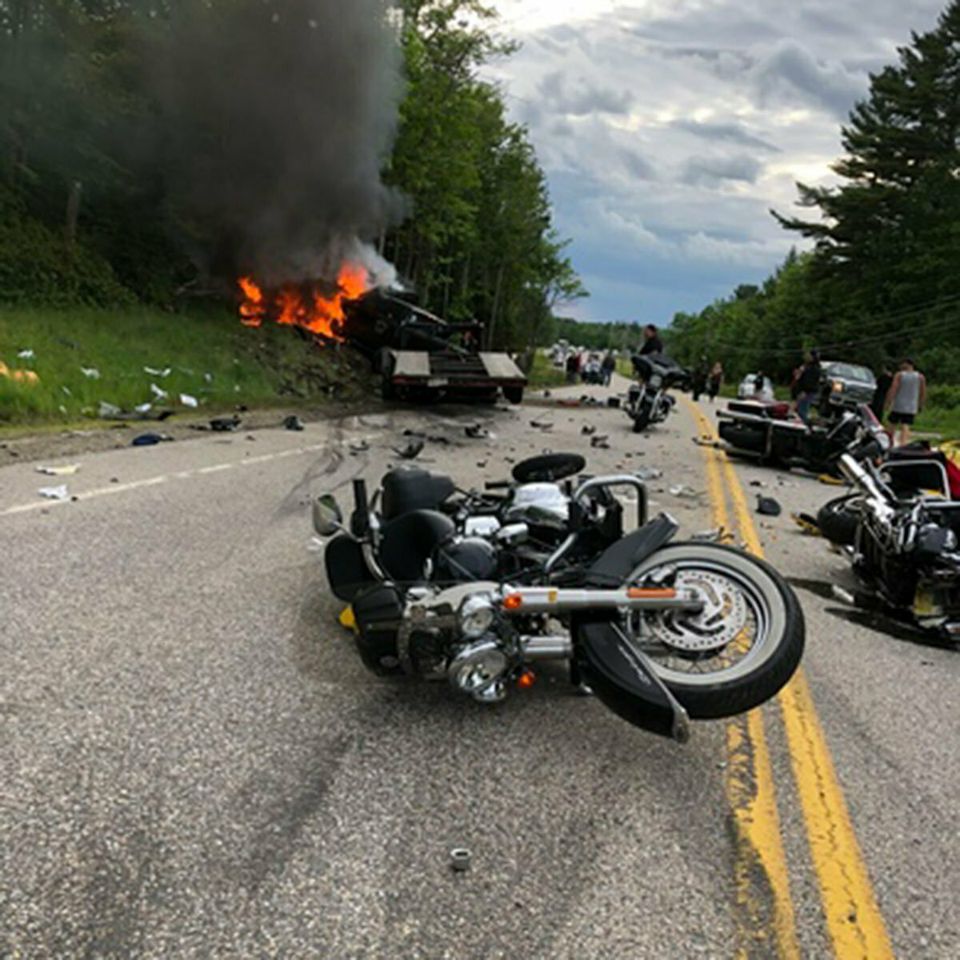 NEW HAMPSHIRE — A woman riding with a group of motorcyclists struck by a pickup truck in New Hampshire said she saw an explosion after the crash that left seven dead and three injured.

Her bike went to the ground and she rolled out of harm’s way after the Friday collision on Route 2 in Randolph. Some of her companions did not escape — all the people killed were bikers.

“It was just all fire,” Dawn Brindley told CNN affiliate WMUR. “I just looked around. Somebody helped me up. I was just hysterical.”

The motorcyclists had been traveling east when they collided with a westbound 2016 Dodge 2500 pickup truck.

“I’ve seen some bad ones here in my life, but nothing like this,” said Randolph’s police chief, Gordon Alan Lowe. “It’s bad. I feel bad for the men that had to be there and women.”

The victims, all from the New England region, ranged in age from 42 to 62, New Hampshire Deputy Attorney General Jane Young said Sunday. The seven died of “blunt trauma,” according to results from released by the chief medical examiner’s office in Concord, Young said.

Some of the victims were Marines

Beatrice Engstrand, a neurologist who was staying at a nearby inn, said the flames went about 20 feet high.

Engstrand ran to the scene with Jerry Hamanne, the co-owner of the Inn. They tried to assist as many people as they could. Engstrand applied a tourniquet to one injured man’s leg and performed compressions on others until help arrived, she told the affiliate.

“It was just terrible. No one thought of taking photos or anything like that. You just want to help the people who were screaming and laying there in the road,” Hamanne said.

Several of those killed were members of the Jarhead Motorcycle Club and were on their way to an event at the American Legion, according to the station. The club’s members include active and veteran Marines.

“All our people are just good, hard-charging Marines,” Scotty Swann, a member of the club, told the affiliate.

The group had just left its hotel when the crash occurred.

Desma Oakes, 42, of Concord, New Hampshire; and Aaron Perry, 45, of Farmington, New Hampshire, and Joanne and Edward Corr, both 58 and from Lakeville, Massachusetts, were also killed.

Of the three motorcyclists injured in the crash, two have been treated and released from local hospitals, and one was transported by air after the accident and remains hospitalized, according to New Hampshire State Police Col. Chris Wagner.

State police collision analysis and reconstruction teams are investigating the crash, along with local police and the Coos County Attorney’s Office.

“The scene is pretty large and there’s a lot of work to be done,” New Hampshire State Police Capt. Chris Vetter said. “I don’t know that I have ever seen a crash with this much loss of life. It was a pretty significant accident.”

The truck driver is identified

The driver of the pickup truck has been identified as Volodoymyr Zhukovskyy, 23, Coos County Attorney John McCormick said at a news conference Saturday.

Zhukovskyy was alone in the truck at the time of the collision and was working as a driver for a transportation company based in Springfield, Massachusetts, McCormick said.

No arrests have been made in connection to the crash, McCormick said.

Young declined to comment on whether the driver of the pickup truck fled the scene, or whether drugs or alcohol were involved, citing an ongoing investigation.