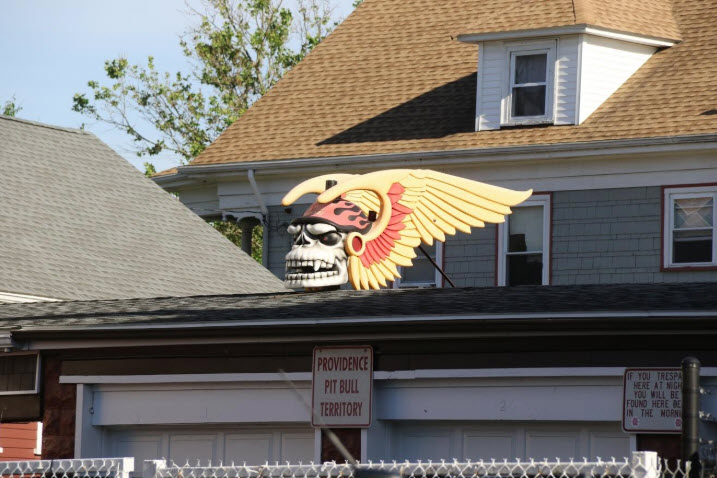 Joseph M. Lancia, 28, was arrested Wednesday afternoon by members of the state police Intelligence Unit and the Violent Fugitive Task Force as part of an investigation into reports of shots fired near the Hells Angels Motorcycle Clubhouse located at 161/163 Messer St., in Providence

The raid took place in a densely populated area, an odd pairing of the benignly curious and the menacingly armed. Onlookers and residents trying to get home were told to stay behind the SUVs. State police wore bulletproof vests. A line of troopers in full protective gear, some with breathing apparatus over their faces, filed from Ford Street toward the motorcycle club’s three-story building, followed by a Humvee-type vehicle, which pulled up breach across Messer Street, facing the club. A white van stopped and troopers poured out.

The Humvee, its battering ram pointed straight at the clubhouse’s red steel door, plowed ahead. The door crumpled. The crowd exclaimed “woo!”

Using a bullhorn, one officer called out for anyone inside 161 Messer St. to come out with their hands up. This was repeated four or five times before a man came out, his hands over his head. He was immediately tackled, his hands cuffed behind him, and kept on the ground. A woman came out with her hands up. She was also handcuffed. Several dogs ran out, one with an immediate need for the curb. One of the dogs licked the face of the man on the ground. An onlooker yelled to police not to hurt the dogs.

As the man was escorted past some senior state police officers, he paused to answer a question by saying he didn’t know. The woman who had come out of the clubhouse, wearing shorts and a black-and-red jersey with a big 81, seemed relaxed as she waited with several officers on a Ford Street sidewalk. She was taken to a cruiser after nearly everyone had left.

Before police entered the clubhouse, the battering-ram truck let out an explosive noise. Then troopers and K-9s disappeared beyond the crumpled door. Occasionally a loud boom, sounding like someone had hit a 55-gallon steel drum with a sledgehammer, issued from inside, raising questions from the crowd about whether it was gunfire.

By 6 p.m., detectives were still gathering evidence inside the clubhouse, but the street had been reopened.

A news release from the state police said they arrested the president of the Rhode Island Hells Angels chapter at the clubhouse at 1:40 p.m. Wednesday. Joseph M. Lancia, 28, of 40 Fanning Lane, Greenville, was taken into custody without incident on a charge of felony assault. The news release said his arrest was part of an investigation into reports of shots fired near the West Side clubhouse.

The events that started just before 6 p.m. were members of the Intelligence Unit and the Tactical Unit securing the clubhouse and conducting a search, state police said.

Lancia was taken to state police headquarters in Scituate, where he was processed and held overnight for arraignment Thursday at District Court, Providence, the news release said.

More charges may be filed as the investigation continues, the release said. State police spokeswoman Laura Kirk said no information would be released Wednesday about anyone else, such as the man and woman who came out of the club, saying a news conference is planned for Thursday.

Kids on bicycles, youths on bright red rental Jump bikes, and one young man on a motorized bicycle were among the onlookers, but no one showed up on a Harley.

On Twitter: @donita22SIGN UP FOR DAILY E-MAIL
Wake up to the day’s top news, delivered to your inbox