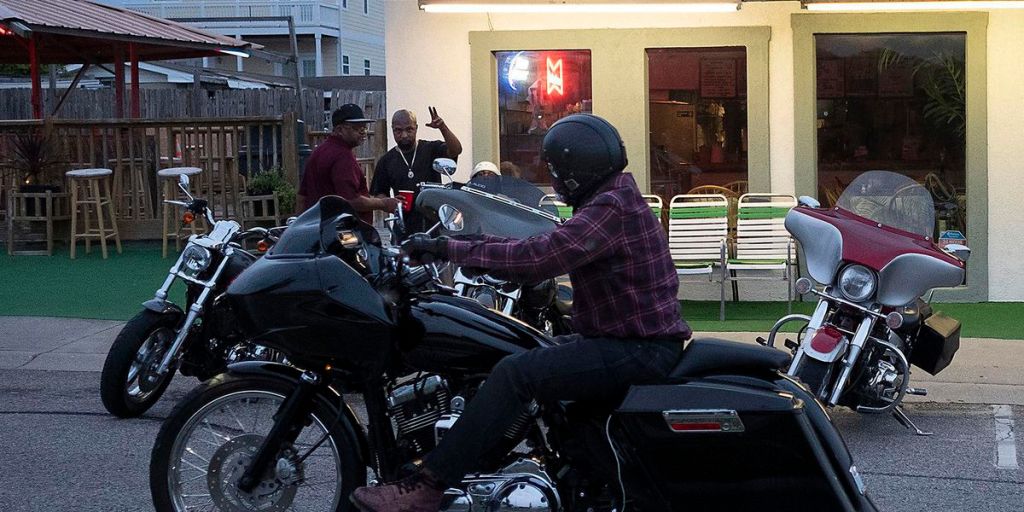 Scrubbing down an outdoor bar top with disinfectant, Pam Vereen remained upbeat even though she had no customers.

4 men with connections to biker gangs arrested in New Brunswick

Normally on the Friday night before Memorial Day, Atlantic Beach would be a buzzing street party, one full of bikers, vendors and onlookers here for Bikefest. Yet as 8 p.m. drew close and storm clouds crept in, the place was a ghost town. Still, Vereen danced to the funk and R&B thumping through the speakers outside The Kitchen, the restaurant her sister-in-law runs.

The Muertos Motorcycle Club will lead a birthday parade for the youngest victim of the Walmart shooting this weekend.

“I’m having a ball,” she said. “I’m just excited, you know, because this is how I support myself — making enough during this Bikefest.”

Technically, this weekend isn’t Bikefest. The festival, known better as Black Bike Week, was officially pushed back to Labor Day because of concerns about COVID-19. But local businesses still hope to make some money this weekend, the milestone 40th anniversary of the rally.

The beachwear shop at the corner of U.S. 17 and Atlantic Street offers a two-for-$10 special on bike week shirts. Off the Hook, the nightclub beside The Kitchen, has opened its doors to patrons.

Brenda Rowell Bromell, who manages The Kitchen, said that although attendance was sparse Friday, she’s hoping for a better turnout as the weekend progresses. She suspects many bikers will come because they made hotel arrangements before the COVID-19 crisis and could not get refunds after the rally dates changed.