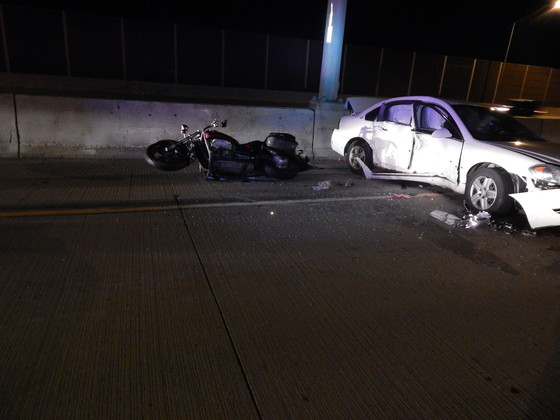 Friday morning at 12:00 a.m., Trooper W. Stancy was dispatched to a multiple vehicle crash on I-80/94 eastbound lanes at the 4 mile-marker.  Preliminary investigation by Trp. Stancy revealed that there were two separate crashes at the same location.

The first crash involved three vehicles, one of which, a white 2007 Chevrolet Impala driven by Vanessa C. Allen, 25, from Chicago, IL, became disabled in the far left lane.  The other two vehicles were able to stop on the shoulder.  While the Impala was stopped in the lane, a red 2003 Honda motorcycle, driven by Steven C. Melton, 26, from Hebron, IN, was traveling eastbound approaching the crash scene.  Due to the curvature of the roadway and the Impala’s lights being damaged from the earlier crash, Mr. Melton was unable to see the disabled vehicle in the left lane.  The rider intentionally put his motorcycle down in an attempt to avoid the Impala, however the motorcycle and rider slid towards the car.  As the motorcycle slid, it flipped over, throwing the rider between his motorcycle and the Impala.  Both the rider and motorcycle then struck the side of the Impala.

The driver of the Impala and her passenger were not injured as a result of either crash.  Mr. Melton sustained serious injuries.  Due to the severity of the injuries, Trp. Stancy applied a tourniquet to the rider’s lower extremity prior to the paramedics arriving at the scene.  Mr. Melton was transported via ambulance to Christ Advocate Hospital in Oak Lawn, IL for treatment.  He was not wearing a helmet at the time of the crash.