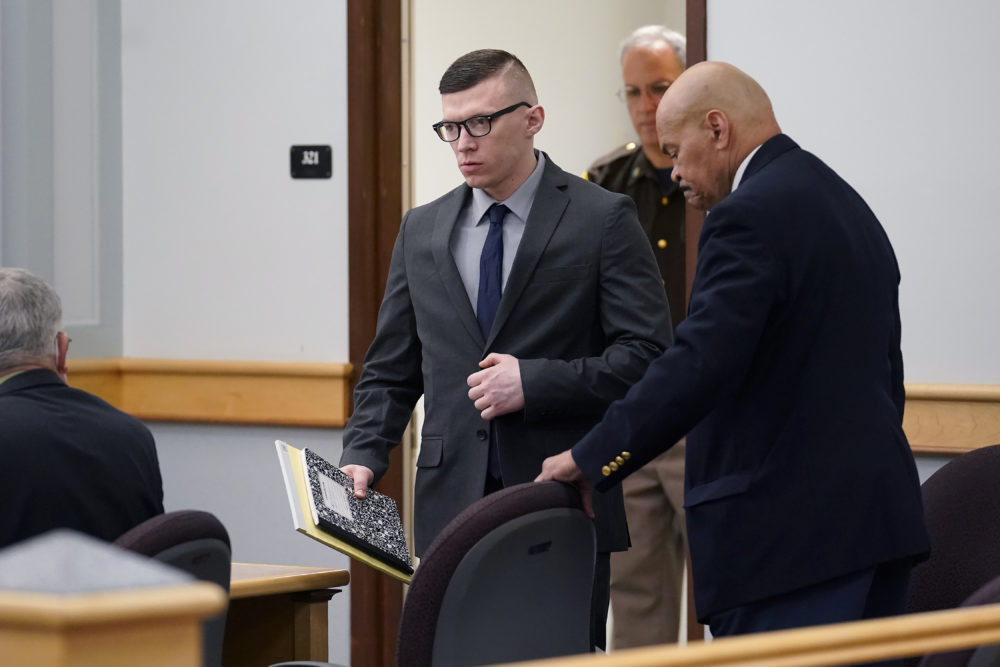 A jury on Tuesday acquitted a commercial truck driver of causing the 2019 deaths of seven motorcyclists in a head-on collision in northern New Hampshire.

Volodymyr Zhukovskyy, 26, of West Springfield, Massachusetts, had pleaded not guilty to multiple counts of negligent homicide, manslaughter, driving under the influence, and reckless conduct, although some of the charges were dropped during the trial. He has been in jail since the crash on June 21, 2019, in Randolph.

WBUR is a nonprofit news organization. Our coverage relies on your financial support. If you value articles like the one you’re reading right now, give today.

His trial began on July 26.

The seven who died were part of a Marines motorcycle club and were from New Hampshire, Massachusetts and Rhode Island. They ranged in age from 42 to 62. They were part of a larger group that had just left a motel and were headed to an American Legion Post in Gorham for a fundraiser.

The jury deliberated for less than three hours before returning the verdict.

Prosecutors had argued that Zhukovskyy, who had taken heroin, fentanyl and cocaine that day, repeatedly swerved back and forth before the head-on crash and told police he caused it. But a judge dismissed eight charges related to whether he was impaired, and his attorneys blame the lead biker, Albert “Woody” Mazza, who was among those killed.

“He was drunk, he was not looking where he was going, he lost control of his motorcycle and slid in front of Vlad Zhukovskyy’s truck. Al Mazza caused this accident. Vlad Zhukovskyy is not guilty,” defense attorney Jay Duguay said in closing statements.

“There is no doubt that this accident was a tragedy,” Duguay said. “But we are not here to decide whether or not this was a tragedy.”

Duguay accused prosecutors of ignoring that their own accident reconstruction unit contradicted their theory that Zhukovskyy crossed into the oncoming lane. An expert hired by the defense, meanwhile, testified that the crash happened on the center line of the road and would have occurred even if the truck was in the middle of its lane because Mazza’s motorcycle was heading in that direction.

“From the beginning of this investigation, the state had made up their mind about what had happened, evidence be damned,” said Duguay, who also highlighted inconsistencies between witness accounts or when witnesses contradicted themselves.

“Those witnesses were all over the place about what they recalled and what they claimed to have seen,” he said.

In particular, Duguay suggested that members of the Jarheads Motorcycle Club “shaded” their accounts to protect Mazza and the club. Prosecutor Scott Chase acknowledged some inconsistencies, but asked jurors to remember the circumstances.

“People were covering the dead, trying to save the barely living, comforting the dying. This wasn’t story time,” he said. “They were up here talking about some of the most unimaginable chaos, trauma, death and carnage that we can even imagine three years later. They were talking about hell broke open.”

Witnesses were consistent, he argued, in describing the truck as weaving back and forth before the crash. That behavior continued “until he killed people,” Chase said.

“That’s what stopped him. It’s not that he made some responsible decision to start paying attention or do the right thing,” he said. “The only thing that stopped him was an embankment after he tore through a group of motorcycles.”

Chase called the attempt to blame Mazza a “fanciful story” and “frivolous distraction,” while reminding jurors of that Zhukovskyy, who didn’t testify at trial, told investigators “Obviously, I caused the crash.”

“He was crystal clear from the very beginning that he caused this crash,” Chase said. “That is what he said, because that is what happened.”

The motorcyclists who died were from New Hampshire, Massachusetts and Rhode Island and ranged in age from 42 to 62. They were part of a larger group that had just left a motel along U.S. Route 2 in Randolph.