The incident occurred in Khammam district in Telangana. The police have formed special teams to identify the person who fled after the incident.

A biker died in Telangana’s Khammam district after being allegedly injected with a suspected poisonous chemical by a pillion rider who requested a lift from him. The victim, identified as 42-year-old Shaik Jamal Saheb, soon stopped the bike and conveyed to a passerby about what had transpired. According to the police, Jamal, a mason by profession, was enroute to his home in Gandrai on his bike. When he reached the outskirts of Vallabhi village, two people requested him for a lift. One of them sat on the bike and proceeded with Jamal.

Speaking to TNM, Khammam Rural Circle Inspector (CI) said, “A little into the journey, the pillion rider allegedly injected Jamal with a poisonous chemical, jumped off the bike and quickly fled. Following this, Jamal stopped his bike and told a passerby what had transpired.”

“An empty syringe was found near the crime scene and the samples have been sent to the Forensic Science Laboratory (FSL) for testing. Only after the results come will we know whether the same syringe was used to inject the victim and what chemical was used. So far, the motive behind the incident remains unclear. The victim’s family says that he had no personal enmity with anyone,” added the CI. 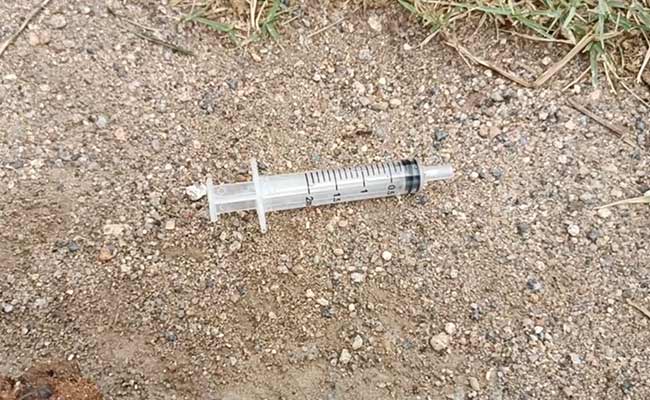 The syringe found at the crime scene

According to the police, the passerby, Shiva, used the victim’s phone to inform his nephew about the incident, following which Jamal was rushed to a primary healthcare centre (PHC). According to Dharmendra, doctor at the PHC, “Jamal was brought in by two men around 10 am. He was in an unconscious state and was sweating profusely. By the time we finished checking his vitals, he collapsed.”

Khammam Commissioner Vishnu S Warrier told TNM that a case has been registered and investigation is underway. “We have formed two special teams to identify the pillion rider. The area where the incident took place is a rural area and hence no CCTV cameras were there in the surroundings,” he said. A case has been registered under Section 302 (murder) of the IPC.