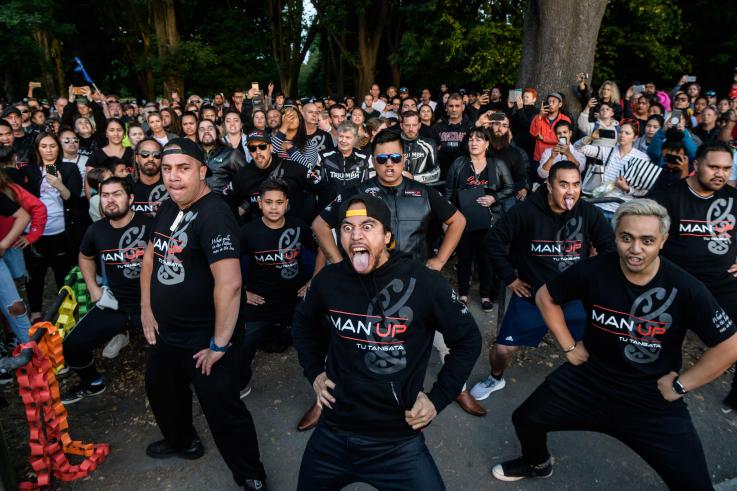 Members of different biker gangs perform the haka as a tribute to victims in Christchurch, New Zealand, on March 20, five days after the twin mosque shootings. The Mongrel Mob gang said it would not give up its weapons set to be banned in the wake of the attack. ANTHONY WALLACE/AFP/GETTY IMAGES

The New Zealand government warned that those who do not give up their military-style semiautomatic guns by September would face five years in prison. The news came as one notorious gang said it would refuse to hand in its weapons.

On Tuesday, the New Zealand Parlilament will hear the first reading of new legislation designed to clamp down on military-style semiautomatic weapons as it seeks to expedite changes in the law following the Christchurch mosque attacks.

The bill will outlaw military guns and assault rifles, although there will be exemptions for guns that farmers often use for pest control.

The Mongrel Mob gang, which is one of New Zealand’s most notorious, won favorable headlines when it said it would protect mosques after the attacks and pledged solidarity with the country’s Muslim community.

But Sonny Fatu, who heads the gang’s Waikato branch based in North Island, said members who had illegal guns should be trusted to not harm members of the public.

“Will gangs get rid of their weapons? No. Because of who we are, we can’t guarantee our own safety,” he told the news site Stuff.

“It’s not in our culture to inflict harm on innocent people like what happened in Christchurch,” Fatu said.

“The attacks between our organizations are gang-on-gang, they do not involve the non-gang members.

“Although there may be peripheral damage and violence that occasionally spills out into the public eye, it is absolutely and without intention for any harm to be caused to non-gang members,” he said.

Police Minister Stuart Nash, however, said there would be no exceptions to the new legislation and that there would be five years prison time  for those caught with them.

He also defended the speed of the legislation, which could take effect as early as April 12, less than four weeks after the terror attack that left 50 people dead.

“My advice to the gangs is: ‘Hand your weapons back,'” he said, according to the New ZealandHerald.

“Everyone I have spoken to, be they hunters, farmers et cetera, have said you do not need MSSAs [military-style semiautomatic weapons] or an assault weapon to go hunting or do farm business. These are guns designed to kill people.

Black Power member Denis O’Reilly echoed Fatu’s sentiment when asked if his gang would hand over their guns. O’Reilly said, “Of course not. Why the hell would you be talking about handing back guns when you’re talking about progressing your family and moving from pathology to potential. Where on earth would discussions about guns come up in that?”