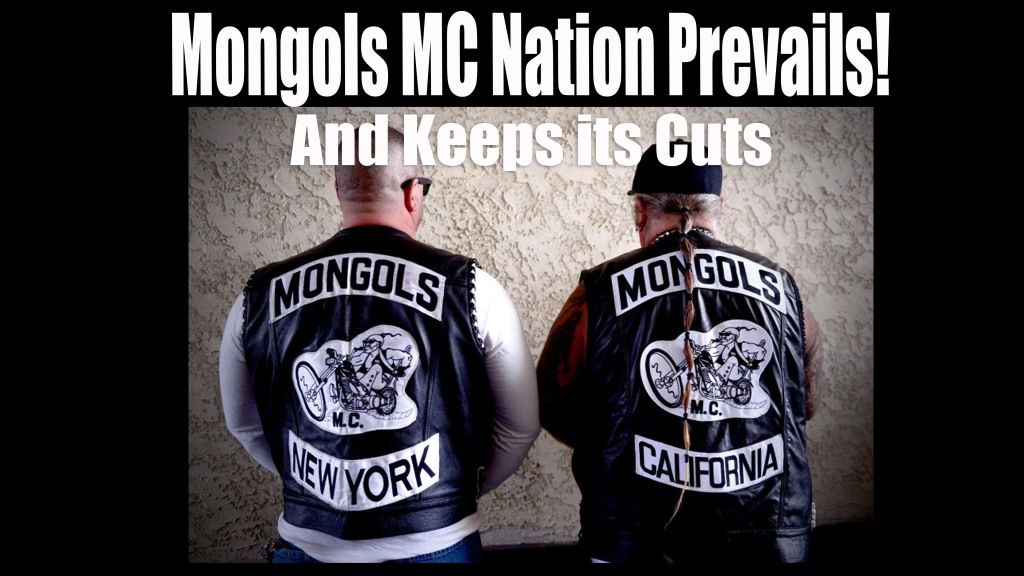 SANTA ANA – A federal judge has rejected the U.S. government’s unprecedented effort to gain control of the prized patches that adorn the vests worn by the notorious Mongols motorcycle club, ruling seizing the outlaw organization’s trademarks would be unconstitutional.

Jurors agreed as well that the government should seize the Mongols’ patches and trademarks, but Carter’s ruling overrides that portion of their verdict.

Attorneys for the Mongols described the ruling as a victory for all motorcycle clubs. At the center of the legal battle was control of the patches that depict the club’s name and an illustration of a ponytailed, Ghengis Khan-type motorcycle rider wearing sunglasses.

Officials with the U.S. Attorney’s Office said they are disappointed by the ruling and considering an appeal.

“While affirming the jury’s guilty verdicts on racketeering charges, the court’s ruling nullifies the jury’s finding that these (patches) are a core component of the Mongols’ decades-long pattern of murder, assault and drug trafficking,” said Thom Mrozek, a U.S. Attorney’s Office spokesman.

Carter’s ruling is unlikely to stand as the final word in a case that has drawn national attention. The first-of-its-kind effort to convict the Mongols organization, rather than specific members, of racketeering in order to strip members of their well-known insignia is almost certain to make its way before the Ninth Circuit Court of Appeals and possibly to the U.S. Supreme Court.

Carter upheld the racketeering conviction and tentatively agreed that the government can keep seized guns and ammunition from the Mongols. But he ruled that efforts to take control of the Mongols’ insignia and patches violates the First Amendment’s freedom of speech and association protections and the Eighth Amendment’s protection against excessive fines.

“Not everything repugnant is unconstitutional,” Carter said. “And what does the government plan to do with the tattoos of the (Mongols’ insignia and patch) on members’ backs, arms and other body parts? … That certain individual members of the Mongol Nation displayed the symbols while committing violent crimes or were rewarded with other patches for the commission of crimes does not justify the government’s attempts to bootstrap a conviction of the motorcycle club into censorship of uncharged members or supporters.”

Attorneys for the Mongols have described the patches that adorn members’ leather “cuts” as the organization’s “holy grail,” and they have said that the government taking control of them would mark a “death penalty” for the group.

“I’m happy that this is not a death sentence here,” said Attorney Joseph Yanny, who represented the Mongols in the racketeering trial. “But I don’t like the fact the club has been labeled a criminal organization.”

Prosecutors have argued that taking the Mongols’ trademark is the only way to stop the “cycle of crime” committed by club members. The Mongols have countered that the crimes were committed by “bad apples” who are no longer involved in the club.

In December, jurors agreed that the Mongols organization engaged in drug trafficking, vicious assaults and murder. Much of the violence – which included attacks, some fatal, in bars and restaurants in Hollywood, Pasadena, Merced, La Mirada, Wilmington and Riverside – was tied to a decades-long rivalry between the Mongols and the Hells Angels motorcycle club.

Carter noted that the government has spent more than a decade attempting to take control of the Mongols’ trademark, at one point claiming it wanted to be able to stop members of the club and literally take their jackets off of their backs.

“The government is not merely seeking a forfeiture of the ship’s sails,” Carter wrote. “In this prosecution, the United States is attempting to use (racketeering laws) to change the meaning of the ship’s flag.”

The Mongols, one of the nation’s largest motorcycle clubs, was formed in Montebello in the 1970s, and is now based in West Covina. Among those who testified on behalf of the club during the recent racketeering trial was Jesse Ventura, a former Minnesota governor and retired pro wrestler who joined the group in 1973 while still on active duty in the U.S. Navy.