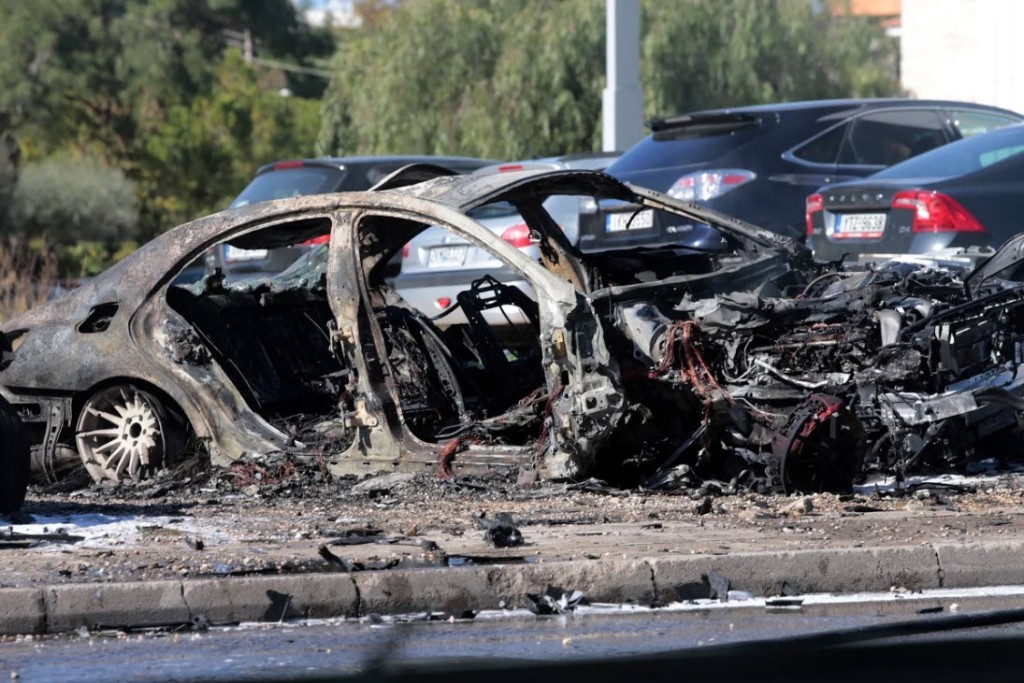 Malkoun, who was previously Victorian head of the Comancheros, was trying to start his Mercedes outside a gym in the upmarket suburb of Glyfada on Friday when the blast occurred.

Four other cars were scorched during the explosion and the 56-year-old was rushed to hospital with serious but non-life-threatening injuries.

Police experts search for evidence at the site of the explosion. Photo: EPAShare:

More: The case against high ranking members of the Bandidos Motorcycle club.
More: Twin Peaks biker charged in neighboring county less than one year after dismissal.

The bomb blast was close to where Sydney gangland figure John Macris was shot dead in October. It is not known whether Friday’s car bombing was related, but security officials told a Spanish news agency authorities believed the attack might have been carried out by an organised crime gang.

Malkoun, a convicted drug trafficker, left Australia in 2013 and has been living in Greece for two years.

Witnesses said when the bomb went off, two passers-by pulled Malkoun from the car, which was engulfed in flames. He is believed to have sustained extensive burns.

The local media said investigators found residue of an explosive device that had been placed under the vehicle, raising suspicions it was a targeted attack.

Ekathimerini newspaper said it was unclear whether the explosive was detonated by the ignition or remotely. The publication also reported that Malkoun’s car had Australian licence plates, while his driving licence was issued by the United Arab Emirates.

Police experts search for evidence at the site of the explosion. Photo: EPAShare:

When the bomb exploded, it sent fragments of the vehicle flying 150 metres in all directions.

Firefighters said when they arrived at the scene, four other vehicles were also on fire.

Witnesses said they heard several explosions, according to domestic media.

Police cordoned off traffic in the vicinity.

Malkoun had been sentenced for his role in a drug syndicate in the 1980s, News Corp reported. He led the Victorian chapter of the Comancheros biker gang from 2009 to 2013.

A Department of Foreign Affairs and Trade spokeswoman said it was “providing consular assistance to an Australian man in Greece”.This article appeared in the South China Morning Post print edition as: Former biker gang leader hurt in Greek car blast.